The Sirtos band was formed in the fall of 1980.

At the time, the favorite entertainment option of folk music lovers was the "táncház" (dance house: authentic folk dancing with live music). At the tender age of one, Sirtos inherited the stage of Danúvia Cultural Center, and thus they had the opportunity to launch their own dance house. 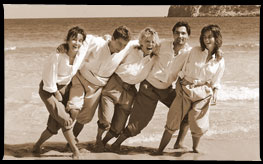 Tours of the country followed, then in 1982, the first guest performance in Greece. The joyful and appreciative reception of the Greek audience gave them incredible momentum for their further work. They collected a great deal of music material, and gradually increased the number of their instruments as well. At the same time, they produced numerous recordings for the folk music programs of the Hungarian Radio. They learned the playing techniques of the folk instruments from local masters during their tours in Greece.

From 1986 on, the gates of Western Europe were also opening before them. They performed in Holland and Belgium, then in Austria and Germany. There is no better evidence for their success than that for more than 6 years the audience expected their return every winter.

At the Budapest performance of the world-famous composer, Mikis Theodorakis, the Sirtos band had the honor to entertain the audience before the show - with enormous success. 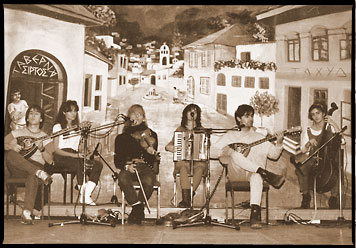 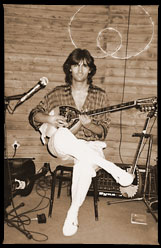 Since 1993, they haven't taken on any more long (5-6-month long) tours, and so the possibility has opened for them to visit the surrounding Mediterranean countries during the summer months. In Italy they are, so to speak, regulars. In the past 12 years, they have been virtually everywhere from the Alps to the island of Sicily. Portugal and Spain followed, where so far they have toured six times.
They have continued these travels to this day.
Among themselves this is what they call "active relaxation."

In 2000, they came into contact with the Ballet of the Hungarian State Opera House in connection with the ballet entitled "Zorba." Following their tour in Istanbul, they have also performed at the Budapest shows of the Ballet. 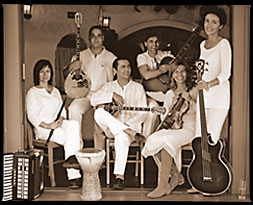 The name SIRTOS was adopted from a dance that is well-known and popular in Greece.
They have kept up their dance house throughout their entire career, which can only be said about one or two folk bands. After 15 years-following the closing down of Danúvia-they moved to Almássy tér where for 17 years the audience had the opportunity to see and hear them every Sunday. Because of the closing of the Almássy Tér Leisure Center, as of February 2008 the Óbuda Cultural Center has become their newest residence.