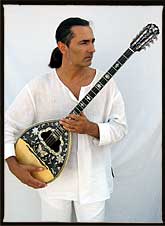 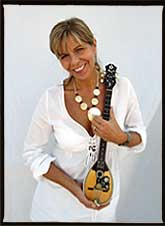 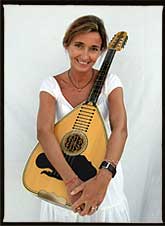 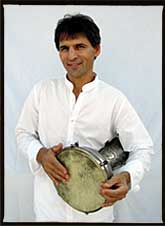 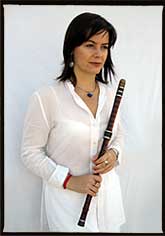 The BUZUKI is a typical folk instrument to be found in Greek tavernas, in bands playing the "rebetiko" style of music. It can also be found among the instruments that were used in the times of ancient Greece when the name of this long-and-slim-necked instrument was "trichordo." In Asia Minor it is classified among the family of instruments called "saz." During the Byzantine period it was given new names such as "tambouras" and "yongari." It is a three-stringed instrument, its tuning is D, A, D. Its four-stringed version appeared in the 1950s, which was tuned to the notes of C, F, A, D according to the four higher strings of the guitar. The bouzouki is the lead instrument in rebetiko and taverna bands.

The DZURATO, just like the bouzouki, is a member of the long-and-slim-necked family of instruments. Its three double strings are tuned D, A, D. It is an instrument with a powerful and long-resonating sound. The playing technique requiring an up-and-down sliding motion on the long and slim neck demands virtuosity. It is an instrument of the rebetiko style.

The BAGLAMA, in the 20th century, due to its tiny size, was a popular instrument among the "rebetes" as well as among prisoners. The rebetes carried it with themselves stuck under their belt, hidden beneath their coats, and if the mood was such, they accompanied on it the singing and dancing of small groups. It is popular both as a solo and as an accompanying instrument. Actually, it is a smaller version of the bouzouki, its tuning is D, A, D, but its sound is one octave higher than the bouzouki's.

The HARMONICA is a small portable "wind instrument" because it is played by pressing air through it. It is probable that a version of it working on the same principle was already used in ancient Egypt. Europe's first such instrument was made in Berlin in 1822. It is made with chromatic and diatonic tuning, or equipped with piano keys or button-like keys. It is widely used in the folk music of the Greek mainland.

The VIOLIN is the same as the well-known instrument, but the playing technique and sometimes even the tuning vary from region to region.

The DAOULI is, so to speak, a two-headed drum. It is generally carried on a strap across the left shoulder, and they play it in a standing position. In other regions it is placed on the ground. The right side of the drum is covered with a lower-sounding skin, while on the left side the skin is stretched very tight in order to produce a higher sound. The sticks are also different - the low-pitched side is struck with a thick stick called "daouloxylo," while the higher-pitched left side, with a thin stick called "daouloverga." The "low" side takes the ones, while the "higher" side, the ornamentation and upbeats. In ancient Greek times, the name of the instrument was "timpano," the same as that of the percussion section in today's symphonic orchestra. The size and name of the instrument may vary from region to region.

The TOUBERLEKI is a percussion instrument that originated in Asia Minor. Its frame is made of metal, its top is covered with thin leather, or nowadays rather with flexible plastic. The playing technique varies from region to region. It is held either between the thighs in a sitting position or in a standing position under the left arm, with its weight resting on the knee supported by a chair. It is played not only with the hand but also with the individual fingers, producing ornaments of refined triplets. The entire drumhead is utilized in order to achieve different - higher or lower - tones.

The FLOGERA is a woodwind instrument without a whistle, and is the typical solo instrument of Thracian folk music. The playing technique resembles that of the flute because the musician forms with his lips, and substitutes, the missing whistle. It is tuned to C.