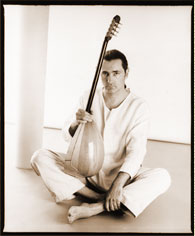 His instruments are bouzouki, guitar, dzurato, baglama, lauto, and vocals.
"I grew up in the suburbs of Budapest. My father was an excellent singer; in our home there was always Greek music playing. During my high-school years, I founded a rock band where I played the bass guitar up until I visited Greece where I fell in love with Greek folk music for life. There and then I purchased my first bouzouki. I signed up for the jazz guitar course of the Postás Music School, and was taking bouzouki lessons from an elderly Greek man who taught me the basics. Following my high-school graduation We soon founded Sirtos, which demanded lots of work, organization, and practice, but in return it rewarded me with the life I had wanted." 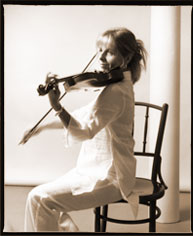 Her instruments are violin, baglama, and vocals.
"I grew up in Downtown Budapest, and it was decided already at the age of 5 that I would become a musician. I attended the Children's Chorus and the Music School of the Hungarian Radio where I learned all that is to be learned about singing in a group and playing the violin. I wanted to become a restorer and after four wonderful years I graduated from the Secondary School of Arts and Crafts. Then I obtained a degree in decoration and was drawing cartoons for Pannónia Cartoon Studio. We founded the Sirtos Ensemble and I became a musician again! (But I have never quit drawing either!)" 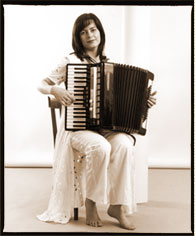 Her instruments are harmonica, kaval, keyboards, guitar, and vocals.
"I was born and spent the first 10 years of my life in Kaposvár. I went to musical elementary in Buda where I was singing and studying various instruments. I continued my instrumental studies during my high-school years as well. Following studies in piano, guitar, and flute, I chose jazz piano, and in the year of my high-school graduation I also acquired my performing artist's license. I was a founding member of the Martenica Dance Group with whom we won the folk dance category of the 1983 Ki Mit Tud? (Who's Good At What?) competition. In Bulgaria I obtained a degree in folk dance choreography. Then the leader of the already very popular Sirtos approached me, and it was with pleasure that I embarked on the discovery of Greek folk music." 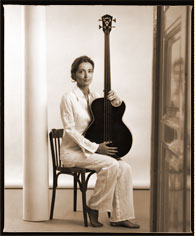 Her instruments are bass guitar, cello, and vocals.
"I grew up in Buda, and started my acquaintance with classical music in a musical elementary. My original instrument was cello which I studied for 12 years, and I also played in the string orchestra of the music school. We won national competitions, and toured in several of Europe's big cities. With our band called Stúdium Dixieland, which we founded in high school, we won the 1983 Ki Mit Tud? (Who's Good At What?) competition. After my high-school graduation, it was with my parents that I first visited Greece where I was fascinated by Greek music and by the life style and temperament of local people. Following this, I started attending Greek events in Hungary where I met the Sirtos band as well. It was in 1986 that the opportunity arose for me to become a member of the band." 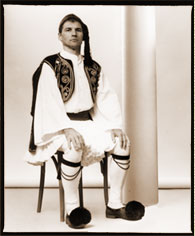 His instruments are percussion such as touberleki and daouli, guitar, and vocals.
"I was born in Gödöllõ, and grew up in Tura. Thanks to my music-loving and music-pursuing parents, I started playing the violin at a very young age. I picked up dancing at the end of elementary school and following my high school graduation I started my career as a dancer of the Fáklya Ensemble. Two years later I became a member, and later a soloist, of the Budapest Dance Group, and for the next 10 years I performed with them on numerous stages and in numerous countries of the world. In 1986, I arranged choreography for the dance group of Sirtos and I myself became a member of the Octopus group. I spent six memorable summers with the band on the island of Crete. My musicality caught the attention of the band already at the very beginning, and they didn't rest until they made a musician out of me. I had my debut on their tour in Holland, and we have been inseparable ever since."